To get an idea of life in New France during the 18th and 19th centuries, a walking tour of Old Montreal or Vieux Montréal is a must.

A good place to start would be the Notre-Dame-de-Bonsecours Chapel at the corner of Rue St Paul and Rue Bonsecours at the eastern end of Vieux Montréal. Construction on the original wood chapel began in 1657. Rebuilt in stone, its present day facade dates from the late 19th century.

The nearby Bonsecours Market, built in 1847, is a testament to Montreals influence in British North America. The building, comprising a Greek Revival portico, tin-plated dome and cast-iron columns imported from England, is a good example of the Neo-classical style of that era. It was the citys main agricultural market for over a century and today houses boutiques and exhibits.

A few blocks to the west lies Place Jacques Cartier, named after the French explorer who discovered the island of Montreal in 1535. The square is the central part of Old Montreal with City Hall on Rue Notre Dame just to the north and Rue de la Commune and the port of Montreal a block south. The square is a veritable microcosm of Montreal during summer with street musicians, jugglers, artists and cafés lining both sides of the square. It is one of the most popular spots for both locals and tourists. Its also where calèche drivers beckon strollers to hop on their carriage for a romantic and guided tour of the old city.

Once at the square, its worth walking up to Rue Notre Dame to visit Château Ramezay named after Claude de Ramezay, Governor of Montreal, who built it as his home in 1705. The building served as a Governors residence, a military headquarters and a courthouse before it was turned into a museum in 1895. It houses a rich history of Montreal and all of Quebec and is surrounded by a garden similar to those of the 1900s.

Just off Place Jacques Cartier lies Rue Saint-Amable, a tiny street filled with shops and artists hawking their wares. Centuries ago, these same buildings housed beaver pelts and other local products ready for shipment to England and France.

Below Saint-Amable is Rue Saint-Paul, the oldest street in Montreal with its cobblestones still intact. Arts galleries, boutiques and restaurants dot both sides of the street, which is also a favorite venue for locals looking for something unusual to buy. 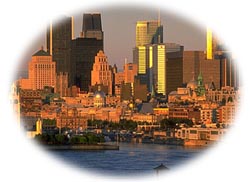 Montreal is the second largest city in Canada but is still able to hold on to the character of a smaller town. With its rich history and French culture, Montreal is a mixture of old and new. The city has a thriving art community and is renowned for putting on spectacular festivals. Read More